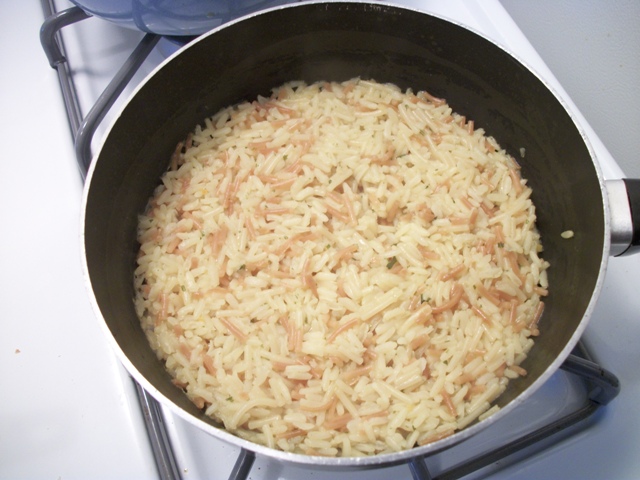 I’m a little tired tonight, so I don’t really want to cook up a storm. My last time at the grocery store I picked up four ears of corn, which by the way does not really work well with braces, but I digress.

Corn is very nutritious and very easy to prepare. I had also picked up this packet of Knorr Rice Sides, chicken flavored. The packet said “Rice & Pasta Blend in a Savory Chicken Flavored Sauce.”  Umm…

It said it would cook in 7 minutes; I laughed, nothing cooks in 7 minutes!  I mean really. Besides I was also doing some corn on the cob.

I first took the husk off the corn, which is quite easy and then broke it into two at the halfway point.  Then I washed them and placed them in a pot of water on the stove.  I ensured that the water covered each pieces of the corn on the cob.  As I’m running out of salt I did not bother to add any to the water, besides it is not really necessary. One corn on the cob did not not seem enough so I added another one also breaking it in two as well.

While that boiled, I started reading the preparation instructions for the Rice Sides. Simple enough:

Add contents to two cups of water and simmer.

I took a coffee cup from the cupboards and filled it with water twice pouring it into the pot each time. It was then I realized that their cup was bigger than mine :-). So I added two more cups. Then I poured in the contents of the packet. It had a great aroma, so that was a good thing.  I then placed the pot on the stove at medium flame.

It took about 30-40 minutes to cook the rice to perfection and just the way I liked it. The key is to turn down the flame, cover the pot and let it simmer checking on it frequently so it does not burn.

The corn on the cobs were cooking and had about another 30 minutes; I like my corn well done, easier on the teeth :-).  I even had to add some additional water.  I usually cook corn on the cob with the pot open as it makes it easier for me to keep an eye on the water level.  You can just partially cover it if you so desire.  But keep an eye out as you don’t want the water to dry out and then it burns.

I spooned out 1/2 of the rice into a plate and ate it as is.  No need for anything else and I’ll have enough for dinner tomorrow night.

Once the corn on the cobs were all done, I placed them in a plate and then ate.  Yum…

Now it is your turn to try it. Let me know how it goes by leaving a comment below.

PS: I’ve done a video on how to cook corn on the cob so will add that to the cooking series once it is all worked out.

Meals From My Mom